Summary: Brixham to Dartmouth (via Dittisham). 14.5 miles in 2 hours and 15 minutes. Very little wind, so we ended up motoring all the way despite a few attempts to sail.

A short trip today. We pottered around from Brixham to Dartmouth. The wind was very light and though we tried pulling the jib out, there really wasn’t enough apparent wind to fill it, so we gave up and just motored all the way round. The entrance to Dartmouth is lovely with Kingswear Castle one side and Dartmouth Castle the other. Kingswear Castle (the smaller of the two) was finished in 1503. The battering it received from the wind and sea meant that they had to replace the standard iron cannons with brass ones as they just corroded too badly. However, it was abandoned within 50 years once guns got more powerful as they could cover the whole river just from Dartmouth Castle. Kingswear Castle has now been restored by the Landmark Trust and can be rented from them. They have restored the ground floor so it is just as it would have been in 1503. Dartmouth Castle is owned by English Heritage and a popular local attracation.

We decided when we came in to motor up to Dittisham to have a look up the river – a lovely wooded river, though rapidly becoming over-crowded with boats in the lower reaches. This wasn’t helped by the fact that the Royal Dart Yacht Club is hosting the J80 World Championships for 2012 this week.  We turned round at Dittisham and came into the Darthaven Marina on the Kingswear side. The marina is right beside the Dart Valley Railway and ever so often loud whistles pierce the air as train run to Paignton via Agatha Christies House – Greenway, now owned by the National Trust who also own much of the coastline around here.

Moored on a fore and aft mooring at the end of the pontoon we are on, is the famous yacht ‘British Steel’. She was built in 1970 for Chay Blyth who in 1971 was the first person to sail non-stop around the world against the prevailing winds and currents. She was designed by the Naval Architect Robert Clark and built by George Philip and Son at Noss on the River Dart, so very appropriate that she is still moored here. She was described as a state of the art yacht for her time and thanks to her using steel for her construction, the British Steel Corporation (now Corus) agreed to sponsor him for his trip. The voyage took 292 days and we can only imagine how tough that must have been going westabout round the Southern Ocean. She is looking a little tired, but has apparently been bought by a group of enthusiasts and she will be restored for charter and adventure sailing trips. 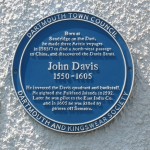 In the morning we headed over on the ferry to Dartmouth for a wander round and were pleasantly surprised. Though there was a preponderance of galleries and tea rooms, the town nevertheless had a nice feel about it and was pleasant to wander around. Just by the ferry we spotted a blue plaque on a house where John Davis lived between 1550 and 1605. Davis developed the navigational instrument called the Davis Quadrant. This was used by navigators the world over to help establish their position. He was also a well known explorer and navigator and discovered the Falkland Islands in 1592. It is thought he sailed with Walter Raleigh between 1596-7 to Cadiz and the Azores.

We headed back on the ferry (the car ferry rather than the passenger one as it was cheaper) and then after lunch headed off for a circular walk to the Brownstone Battery on Froward Point and back. The walk was rather up hill and down dale, but, despite the rain, was a very varied and pleasant walk. The best view was from Froward Point where the Brownstone Battery was built to guard the coast from possible German attack in 1942. The site was equipped with two six-inch guns taken from a First World War battleship. these guns had a range of 14 miles. The station was manned by up to 300 soldiers and the guns were combined with powerful searchlights and barbed wire on all the cliffs. The Brownstone Battery is now manned by the National Coastwatch Institute. This is a volunteer organisation that keeps a watch from 46 stations around the UK. The Froward Point station has been manned since 2005.