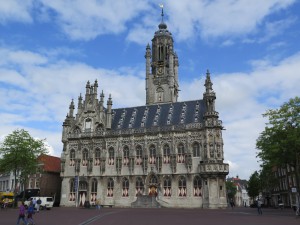 Last night was spent in the Binnenhaven in Middleburg. It was a breezy night, but very sheltered and after a meal with Andy and Phillipa in the Yacht Club, we slept very soundly. The morning was then spent exploring Middleburg. Middleburg translates literally into English as Middlesborough, but there the comparison ends! It is the capital of the province of Zeeland and was founded as a fortified town in the 9th century to defend the local people from Viking raids. The principal growth of the town was in the 15th century though and it was then that the spectacular Stadhuis and abbey were built. The abbey is dominated by the 91m bell tower which is know to the locals as Lange Jan – ‘Long John‘. The rest of the complex is made up of a 14th century Koorkerk and the mis-named 16th century Nieuwe Kerk (‘new church‘). Derek and I went up the Long John tower and the view was excellent – all the way to the Westerschelde by Flushing and the Veerse Meer to the north.

Once Fiona had joined us, we took the 1.15 bridge out of the Binnehaven and pottered up the canal to the lock at Veere. Once through the lock, the plan had been to stop at Veere for a couple of hours. However, with a 20-25 knot north-easterly, the pontoon outside Veere was a lee shore and it looked like we would get stuck there if we stopped so we decided that discretion was the better part of valour and so followed Hoppetosse straight round to Bastiaan de Langeplaat island in the Veerse Meer and moored on a jetty alongside them there. we did manage to sail for half an hour or so on the way, but just half a job still gave us between 5-6 knots in the healthy north-easterly breeze.