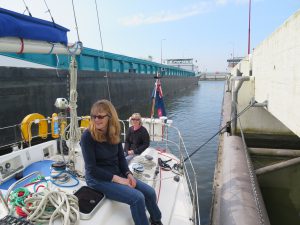 The lesson learned from our landing in Leeuwarden is learn the language! On the way from Lemmer to Leeuwarden there was a large yellow sign. Our poor translation of the Dutch as we motored past meant that we worked out that something was closed until the 16th May. It turns out it is the main road bridge in Leeuwarden which is the next bridge we need to do! Ah well, that gives us three extra days to explore the delights of Leeuwarden.

Apart from finding out about the closed road bridge, we had a good day. We left Lemmer promptly around 9am and headed for the main lock into the Princes Margriet canal. Using this lock meant that we avoided going through the town and initially we felt very smug as we were the only boat in this huge lock. That was until we saw a barge coming, and coming, and coming … My stress level rose and rose and rose …. Eventually he decided he was coming right the way into the lock alongside us. I was convinced he wouldn’t fit, he was convinced he would and luckily, he was right. I radioed the lock keeper to ask if he’d like us to go first, but before we could even release our lines, the barge just went. At this point, just closing my eyes and reciting the phone number for the insurance company seemed like the best solution, but by the time I opened my eyes again, the barge had gone and we still had a whole boat left.

The rest of the day was quite peaceful in comparison. Apart from one point where we gently hit the bottom while waiting for a bridge and one point where I developed a close attraction to a waiting pontoon, we had a varied, but generally quiet trip through to Leeuwarden. We kavorted through the Koevordermeer, snuck through the Sneekermeer and once we had ground our way part Grou, we diverted from the main Prinses Margriet canal and headed into the narrower and more varied staande mastroute. A tight turn in Grou took us up past Warga and then over an aqueduct over the motorway (a bizarre experience seeing the cars go underneath us) and into Hempens. Shortly after Hempens we started the turn into Leeuwarden. Luckily we decided to stay in the Leeuwarder Jachthaven on the east of town as, if we had tried to go through the next bridge, we would have got very dizzy going round in circles waiting for it to open for four days! The evening was then spent in the centre of town at a restaurant beside the canal watching the local plonkers in little motorboats showing us how not to handle them. Despite that we had a lovely evening meal before embarking on the half hour walk back to the marina.

The marina itself is a fairly unusual place. Pleasantly located beside the railway line between Leeuwarden and Groningen and probably next door to the municipal tip (judging from the racket the gulls are making), it is actually quite a nice spot. There are very few yachts, not least because there is a height limit of 3.5m to get into the main marina, but we are moored against the end wall in a relatively quiet (despite the railway line) grassy spot. We were slightly surprised to find a barge reversing close past us just after we arrived – we did wonder if it was the same one coming back for another go, but he very smoothly reversed through a narrow bridge and straight past us.

Leeuwarden itself, once we have walked past the vast factory next door, is a pleasant and fairly laid back town – apparently the birth place of the Mata Hari. Her full name was Gertrud Margarete Zelle, but she adopted the name Mata Hari (meaning ‘sun’ in Malaysian). She was an exotic dancer in Paris during WW1 and seemed to have a thing for men in uniforms. The issue seemed to be that she wasn’t fussy about the colour of the uniform and ended up having ‘dalliances’ with officers on both sides. The French officers persuaded her to spy on the Germans and vice-versa. It’s clear that things were never going to end well and they didn’t. In 1917, she was arrested by the French for spying, sentenced and shot. 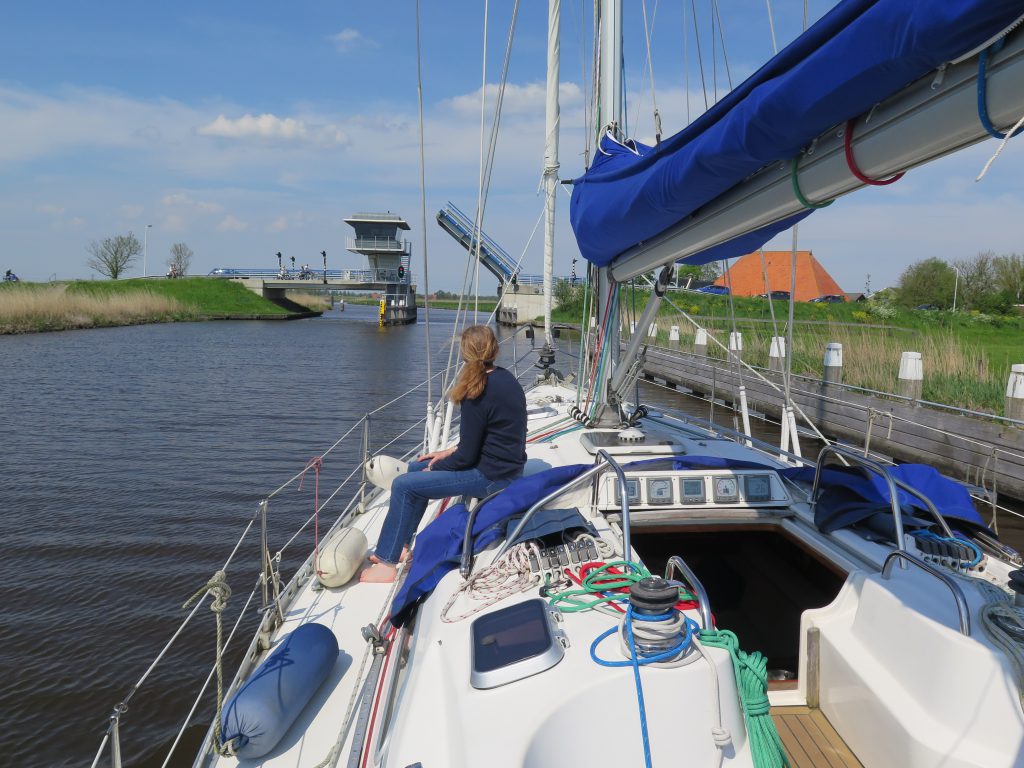