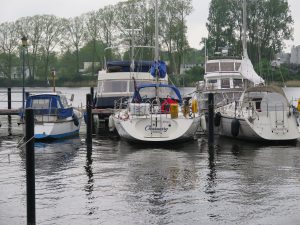 We did the first section of the Kiel Canal today – Brunsbuttel to Rendsburg (35.5 miles). It is not what would be described as one of the most scenic canals in the world – interesting, but not scenic. It is mainly straight and wooded, so by definition there isn’t much scenery for it to be scenic. It is essentially the marine equivalent of the M25 – without as many bends. In fact, this morning it was quite quiet and we only had about 6 ships go past us – mostly in the opposite direction. Two large container ships did come out of the Brunsbuttel locks as we left, but they seemed to pause further back – being held we suspected for ships coming the other way. We were often faced by flashing reds, we presumed to prevent ships from passing each other on bends – avoiding an expensive game of nautical dodgems.

We turned off at the 66km marker into the Obereidersee (Lake Obereider). This is what was left after the River Eider (which used to go through Rendsburg) was dammed as part of the building of the canal. This actually benefited Rendsburg which became a shipbuilding centre, though the yards we came past on the way in looked like they had seen better days – more rust than paint on most of the equipment.

Rendsburg itself is an unassuming but attractive town. It was originally part of Holstein in the 13th Century, but was transferred to Schleswig in 1460. Now it can’t really decide where it wants to be, so is a part of Schleswig-Holstein. Though its medieval heritage is evident in the streets of the old town, one of the most famous structures in the town now is the ‘high bridge’ (Eisenbahnhochbrücke Rendsburg). This was built as a rail bridge over the Kiel Canal and it opened in 1913. Originally the railway went on a swing bridge over the canal, but this held the ships up significantly and so the high bridge was commissioned. The bridge has a clearance (like most on the canal) of 42 metres, but with the land either side being fairly flat, this required the building of around 5.5km of embankments and inclines either side so that they did not exceed a slope of 1:50. Rendsburg station though is at ground level, so the trains do a huge loop on the north bank going round and back again to the station. Looping trains round and round and essentially going nowhere is something we have always been able to do much better than the Germans!

The main feature of the bridge though is the transporter. This is a pod which hangs on steel cables from the bridge and transports cars and pedestrians across the canal. This style of transporter bridge is one of only 20 in the world. I was busy explaining all this to Ric as we approached, and he then assiduously asked – “So where is it then?”. We eventually found the gondola part of the bridge several hundred yards up the canal which either means that Storm Desmond hit them harder than we thought, or that it is currently closed for repair works – very disappointing, but in the best Blue Peter tradition, below is a photo done earlier (well actually one from Wikimedia Commons).