With a breezy, but generally OK forecast we decided to head across to Helsinki today. Unfortunately Porkkala was not quite as sheltered as we had hoped as the wind funnelled straight up the inlet. That combined with the fact that we had to moor on the south side of the pontoon when the pilot book said that the guest berths were on the north side, meant that it was a little more exposed than we expected. It was a lovely place to stop, but we hoped to find a more sheltered berth in Helsinki.

We had a great trip across. Around five minutes after leaving Porkkala Marin we pulled out two thirds of the jib and around half an hour later full jib. We didn’t bother with the main partly because we knew it would be gusting around 20-25 knots, but also because the course was almost dead downwind. Nevertheless we made a good average of over 6 knots all the way and weaved towards Helsinki through the islands. The city skyline gradually emerged and after a short dash across the main ferry channel, we pulled the jib in around a quarter of a mile short of Suomenlinna – our chosen destination. We had found out about Suomenlinna as a recommendation from the CA app (Captain’s Mate) and also from the Finnish pilot guide. It seemed like a good location as it is close to the city (a 15 minute ferry ride away) but also an interesting destination in its own right as it is a UNESCO World Heritage Listed site. As we came in it was rapidly more sheltered and there is a nice guest harbour on the right hand side as you enter the bay in the middle of the islands. Suomenlinna is actually made up of six interconnected islands – Kustaanmiekka, Susisaari, Iso-Mustasaari, Pikku-Mustasaari, Länsi-Mustasaari and Långören. These are all linked by bridges but on the west side there is a channel into the bay in the middle of the islands. There is also a police and customs centre (with some mean looking RIBs and surprisingly also a hovercraft!) and a dockyard with a vast dry dock. The dry dock is now used for the maintenance and preservation of wooden boats and a number of them are berthed dry here in the winter – only two are still in there at the moment. 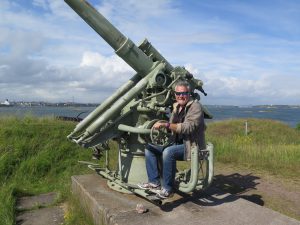 The fortress at Suomenlinna was originally called Sveaborg as it was built by the Swedish. The work started in 1748 when Finland was still part of the Swedish empire and the main motivation for the build was concern about Russian aggression and the lack of a naval base nearer than Karlskrona. The fortress was designed and built by Augustin Ehrensvärd and one of the museums on the island is his house where he lived and worked. The fortress was then taken over by the Russians in 1809 and only finally became Finnish in 1917. For a while it was a military base, but was finally turned over to civilian administration in 1973. The islands were originally known by the Finns as Viapori (the name of the cafe by the guest harbour), but the name was changed to Suomenlinna (Castle of Finland) in 1918 and has been known as that since, though Swedish-speaking Finns still refer to it as Sveaborg.

We arrived just before lunch and had an excellent lunch at the cafe by the boat and then spent the afternoon wandering around the islands. We also visited the last remaining Finnish submarine – the Vesikko. She as built in 1933 at Turku for the Germans as an experimental submarine but was taken over by the Finnish Navy shortly before the second world war and was one of five Finnish submarines serving in the navy. During her service she sunk one Russian merchant ship – Vyborg – and was retired from service in 1944 under the peace treaty with the allies. Finland was banned from operating submarines after the war and she was kept in storage until she was moved to Suomenlinna and restored – a process which took over a decade. She finally opened to the public in 1973.