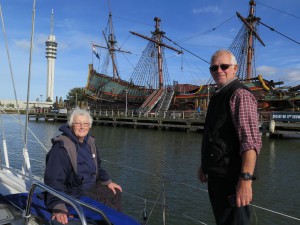 Chris and Wendy spent the morning touring the Batavia Werf museum and looking round the Seven Provinces and Batavia ships. On the way out we motored close past the Batavia to be greeted by one of the volunteers in costume from the era and clearly in character as he shouted ‘”English go home – we remember Nelson”. A very entertaining and aguably zenophobic exchange resulted! It turned out he had been chatting with Chris and Wendy earlier as they looked around the ship! We then set off past the Gormley statue at the entrance.

The Gormley sculpture, called Exposure, was erected in 2010. It is 85 foot tall and weighs 60 tonnes. The sculpture contains 5,400 bolts and consists of 2,000 components. If this crouching man stood up, he would be over 100 metres tall. On a polite day, the locals call the sculpture de hurkende man (crouching man), but the more irreverent have christened it de poepende man – “the shitting man“. Each metal element in the sculpture is of a different length and was hand-cut; the non-orthogonal angles at which they meet can probably only be understood by a mathematician. The form was digitised using software and then algorithms were used to help place all the elements so that they appeared to take the form of the crouching man.

Not only did the hour go back last night but the weather appeared to as well. The weather gods smiled on us today with sunshine, but they forgot to blow, so we motored all the way across from Lelystad to Enkhuizen in around 3-4 knots of breeze. Nevertheless – a very pleasant trip with excellent visibility. At one stage we could see Lelystad tower, Enhuizen church tower, Marken lighthouse, the tower blocks in Almere and towers in Amsterdam all at once. We quickly got through the Enkhuizen lock with just one traditional Dutch yacht and arrived at Compagnies Haven just after the Harbour Master had gone home. So, we got to choose our own berth and, not surprisingly, did not choose a box berth. We ended up nice and close to the facilities in a nice box (with a finger berth) by the Meldsteiger pontoon.

We then had a lovely walk around town and a beer on the town quay. A tough afternoon! As we passed, the fish shop was still open so bought some smoked eel as a starter for supper – a real taste of Holland. 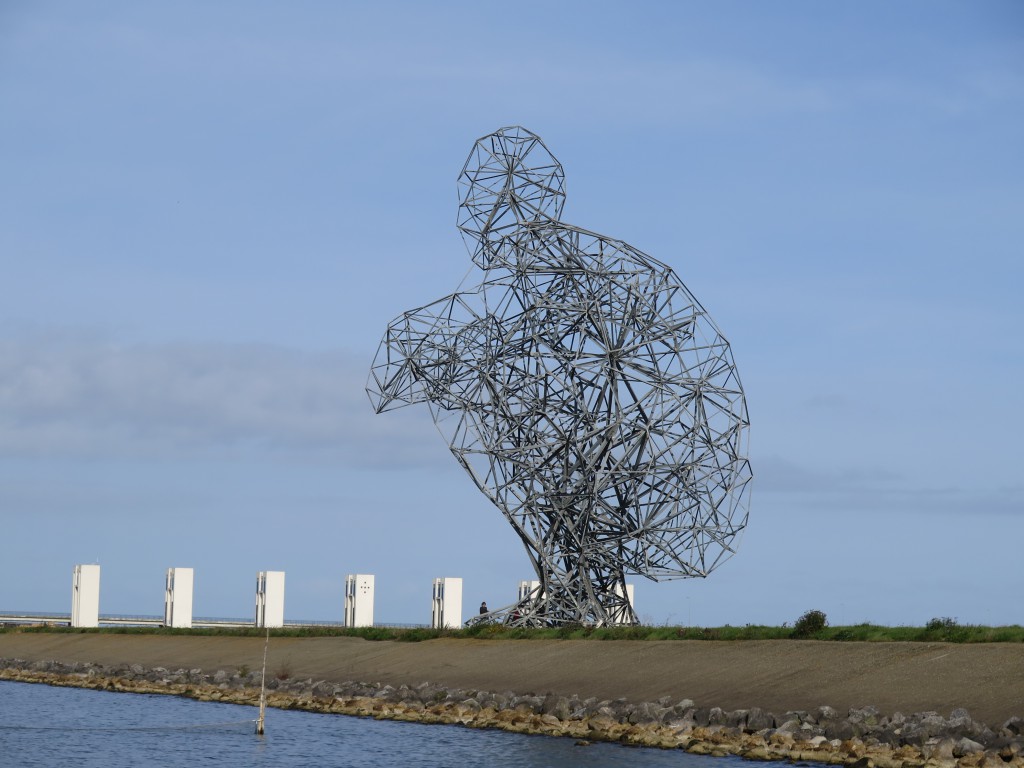