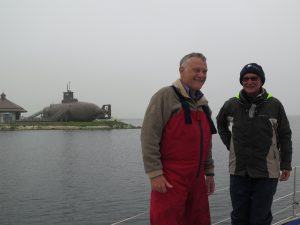 A trip of three halves today. We set off just before 9am from Burgstaaken in grey murky weather making our way carefully past the moored U-Boat. Okay it was on the shore, but you can never be too careful! The U-Boat is U11 and she is part of a U-Boat Museum on Fehmarn. U-Boat is an anglicisation of the name Unterseeboot – literally undersea boat. The word has become a shorthand for military submarines.

Once round the southeastern point of Fehmarn we turned directly across to Falster Island. We managed to sail the first part with the confident expectation that the weather would improve. However, the weather just had one final trick up its sleeve. Suddenly we were immersed in a bank of fog with minimal visibility. They say you should try and experience a range of things in life and I now know how a rabbit feels in the headlights ….. The fog had of course appeared just as we were crossing the main shipping lanes for all the ships heading into the Baltic. They all have to go through between Falster and Fehmarn and we were directly crossing their path. It was at this point that we discovered that the AIS had decided to throw in the towel. So, with one below watching instruments, one on the bow listening to foghorns and assessing where they were coming from and the other two of us watching very very carefully, we cranked up the engine and tried to work out how fast it would get the boat to go. As soon as we got the other side of the shipping lane, the fog cleared and the sun came out. We then had a glorious spinnaker run across to Gedser where we came in just before a British Starlight 35 who are from Woodbridge but keep their boat in Fehmarn.

Gedser is a very small town (population of around 750) and is the most southerly town in Denmark, but it is in Denmark so we are onto our next courtesy flag. It is also the ferry port for ferries across to Rostock.