A short and wet trip today from Langelinie Havn in Copenhagen to Helsingor – better know in English as Elsinore (from Hamlet fame!). The weather was not quite as forecast – we set off expecting a nice sunny day and got drenched. The rain started just as we left and on and off kept going for the whole trip, with a bit of thunder and lightning to spice things up a little. So, we motored around two-thirds of the trip and sailed the rest. Still it gave us lots of exercise pulling the jib in and out. In total we did 21.2 miles and moored in Helsingor marina – just north of Helsingor (or Kronborg) Castle. Between Helsingor (Denmark) and Helsingborg (Sweden) is just a few miles and is the narrowest point of the Oresund. We had almost forgotten about current until we got here and suddenly went sideways as we headed across to the marina. Through the narrows, there is a current, which apparently can run at up to 3-4 knots, but depends on the time of year and wind. For those of us used to consistent tides, this is thoroughly confusing! 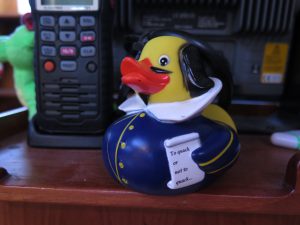 Running across the Oresund are very regular ferries (the busiest ferry route in the world apparently with over 70 departures per day) and walking around town, we quickly realised that many of those on the ferries are Swedish who are coming across to Denmark on a ‘booze cruise’. Alcohol is a lot cheaper in Denmark than Sweden and there was a regular procession of people with shopping trolleys heading into the off-licences.

Kronborg (or Elsinore) Castle is where Hamlet was set. The castle is a UNESCO world heritage site and every year in the courtyard of the castle, Hamlet is staged. Notable actors performing the role here have included Laurence Olivier, John Gielgud, Christopher Plummer and Derek Jacobi. In fact, Hamlet’s castle is almost certainly a misnomer and the fated prince almost certainly never saw a ghost here. Shakespeare probably derived the name Hamlet from Amleth – a Jutland Prince of pre-Viking times. It is nevertheless a good story and one the twon trades off. So much so that we felt it important to have a suitable memory of the town in the form of a Shakespeare rubber duck holding a scroll saying ‘To quack or not to quack‘. We like to ensure that we grasp high culture and raise the intellectual level of discussion on board!

The castle was actually built by King Frederick II between 1574 and 1585 to extract tolls from passing shipping, something it was clearly good at given its location and imposing position.