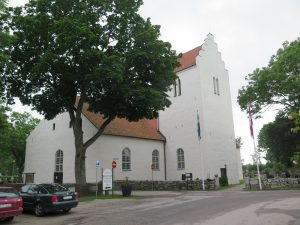 A short and murky trip today. In complete contrast to yesterday, today dawned grey and murky. After blowing a healthy breeze all night, we were hopeful of a fast downwind ride to Kritianopel. We set off just after 9am with high expectations, pulled the jib out just outside Utklippan and within 20 minutes the wind had died and it started tipping it down with rain. After an hour we gave up any pretence at sailing as we were down to just 2.5 knots, so we rolled the jib in and motored, lurching and rolling our way downwind the 22.8 miles to Kristianopel. The pilotage in is straightforward with a well-buoyed channel and it made a nice change for the rocks to appear further away than they did at Utklippan. It is a small harbour with stern-to mooring so we got to use our new hook again!

The town was founded in 1600 by the Danish King Christian IV. Until the border town of Blekinge became Swedish in 1658, it was an important border town and the remains of an 11 metre high wall round the town are still visible, though they are much lower as the town was ransacked by the Swedish. The church was built in 1624 in Danish style and still flies both the Danish and Swedish flags by the cemetery. In the evening a local drama group was doing a re-enactment around the village. We followed it for a while and it was very entertaining, but not very informative as it was all in Swedish!