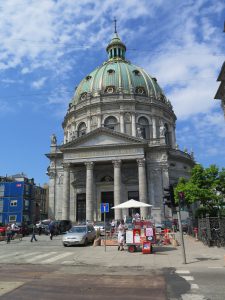 A lay day today. Derek and Adie needed to head off to the airport around lunchtime for their flight and so Ric helped them out while Fiona and I headed into Copenhagen for a look round. First stop (apart from a cafe) was the Design Museum and then we wandered around. We headed across town past the Nyhavn canal to the Tivoli, then back round to the north to the Round Tower ( the Rundetaarn). This was originally built by Christian IV as an astronomical observatory. The tower was completed in 1642 and was a part of the University, including a library and a church for the students. Rather than steps up the tower though, they created a 7.5 turn helical ramp. This allowed all the equipment to be pulled up to the top of the observatory. In 1716 Czar Peter the Great ascended the tower on horseback, while his wife Catherine is reputed to have followed in a horse drawn carriage. Not to be beaten, in 1989 Thomas Olsen went up and down the tower on a unicycle in 1 minute 48.7 seconds – a world record (probably because no-one else has tried it). They have also run bicycle races up and down the tower. However, we didn’t rush and had plenty of time at the top to enjoy the views over Copenhagen. We then walked back to the boat through the Kongens Have past the Rosenburg Slot – lovely walk back.