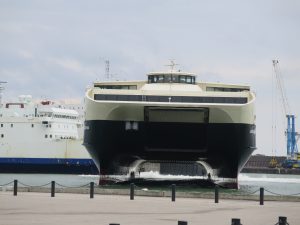 Actually not much surging at all was involved on this trip. Having been delayed in departing from Ystad by the weather, we were a day behind heading off. Roger and Sue had arrived to join us and so we decided to spend the enforced lay day heading off on the fast ferry to Bornholm. The island of Bornholm is, slightly oddly, Danish even though it lies a lot closer to Sweden. It has been fought over for years and has, at various times, been Swedish, Danish and oddly, ruled by Lubeck. Because it was Danish, it was occupied during the war by the Germans and was, due to its position, strategically important.

We took the fast cat over to the island first thing in the morning and arrived just before 10am. The ferry takes around an hour and 20 minutes to do the 35 mile crossing. It docks at Ronne which is the largest town on the island. We spent a couple of hours looking around them and then headed up the coast to Hasle on the bus. Unlimited bus fares were included in the ferry ticket. At Hasle we headed to the smokery. Smoking fish was one of the key local industries and though they didn’t seem to do it on site any more, there was an excellent restaurant offering a buffet lunch with a choice of fish or fish or some other fish – nearly all pickled in some shape or form. It was excellent (if you like smoked and pickled fish!). After a look round Hasle, we then headed back on the bus for the late afternoon ferry back to Ystad. The day was rounded off with a very nice beer in a local micro-brewery. Great beer, lousy service (!) and a mortgage required to afford them, but nevertheless a good pub. 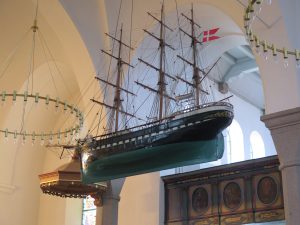 Today the weather was better, so we headed off just before 8am for Simrishamn. The trip itself was about 29 miles and thoroughly uneventful. We did sail for about half a mile, but the wind then dropped again, so we ended up motoring near enough the whole trip. The weather seems to veer from too much to too little in a moment! For most of the trip the sun shone and once in, we had lunch in the cockpit which made up for having to motor all the way.

Simrishamn is a nice stop. The harbour has great shelter and an easy entrance and generally the visitor berths seem to have plenty of water so long as you don’t go too far along. As ever, payment was by a tally card system, though the showers were for once free – you just needed the tally card to get in. Simrishamn used to be a thriving fishing village in medieval times with a large herring fleet. From the 1700s onwards it became a major port for the grain trade, but now seems more focused on agriculture and tourism – something we could understand as the beaches around the coast looked lovely.