After two days holed up in Verkan on Korpo we were ready to head off. The weather wasn’t quite so sure it was ready to head off and, while it was lovely and sunny, it was still blowing quite hard today. However, it had eased quite a bit from the last couple of days (where we had gusts around 34 knots), so we decided we would do a short tip around the west and south of Korpo to Korpoström. After shopping in the morning we aimed to head off around lunchtime and had the lines off ready to leave when I found the steering had decided to lock part way round. So – we had two options. Either we kept turning right all the time, or we fixed it. we chose the latter. we started dismantling the various elements of the steering and eliminated possibilities. First it wasn’t the steering ram, then it wasn’t the autohelm ram, then it was the rudder itself … Finally we narrowed it down to the gearing in the steering pedestal. It turned out that one of the bolts holding the plate in the pedestal down had worked loose and was jamming the steering plate fro  turning. Thank goodness this happened while in harbour. Once we had diagnosed it, it was a relatively easy fix and we headed off about an hour after Airborne.

Once out we had a lovely sail under two-thirds jib. With winds gusting around 24 knots we had a fast passage round to Korpoström – a lovely sheltered guest harbour on the south of Korpo. Though there isn’t much at Korpoström, there is a fancy new hotel and conference centre and a really nice bar! In fact it is on the traditional sailing ship route through to Helsinki and has been the site of various battles – most famously between the Russians and the Swedes in 1743. The Russians defeated the Swedes and there is a cross erected in memory of those who died. The battle was a part of the Russo-Swedish war between 1741-43 which resulted in the occupation of Finland – known as the Lesser Wrath.

Given the relaxed start to the day, I also decided to use it to get to know a little more about Finnish sauna etiquette. Near enough every harbour so far in Finland has had a sauna and Verkan was no exception. It is estimated that there are two million saunas in Finland for a population of 5.3 million. In fact even the Prime Minister and the President have personal ‘official’ saunas. The symbol for a sauna in the pilot book has three things on it – a bucket and ladle and a birch branch. All three are part of the sauna experience. The water is thrown onto the stones on the heater to create steam and help you to perspire more while the birch twig (a vihta) is used to beat yourself to stimulate circulation. This part luckily has been absent from our saunas so far. However, modesty is not something to hang on to when having a sauna. It seems that only the British go into a sauna with a towel – something I realised this morning having a sauna with a Finn who had a fairly enthusiastic approach with the ladle and water – clearly a hardcore sauna user. The real experience is said to be going into the sauna and then jumping in the snow outside. However, snow is mercifully absent at the moment, so a shower was fine.

We have seen various saunas so far – one was being towed behind a boat: 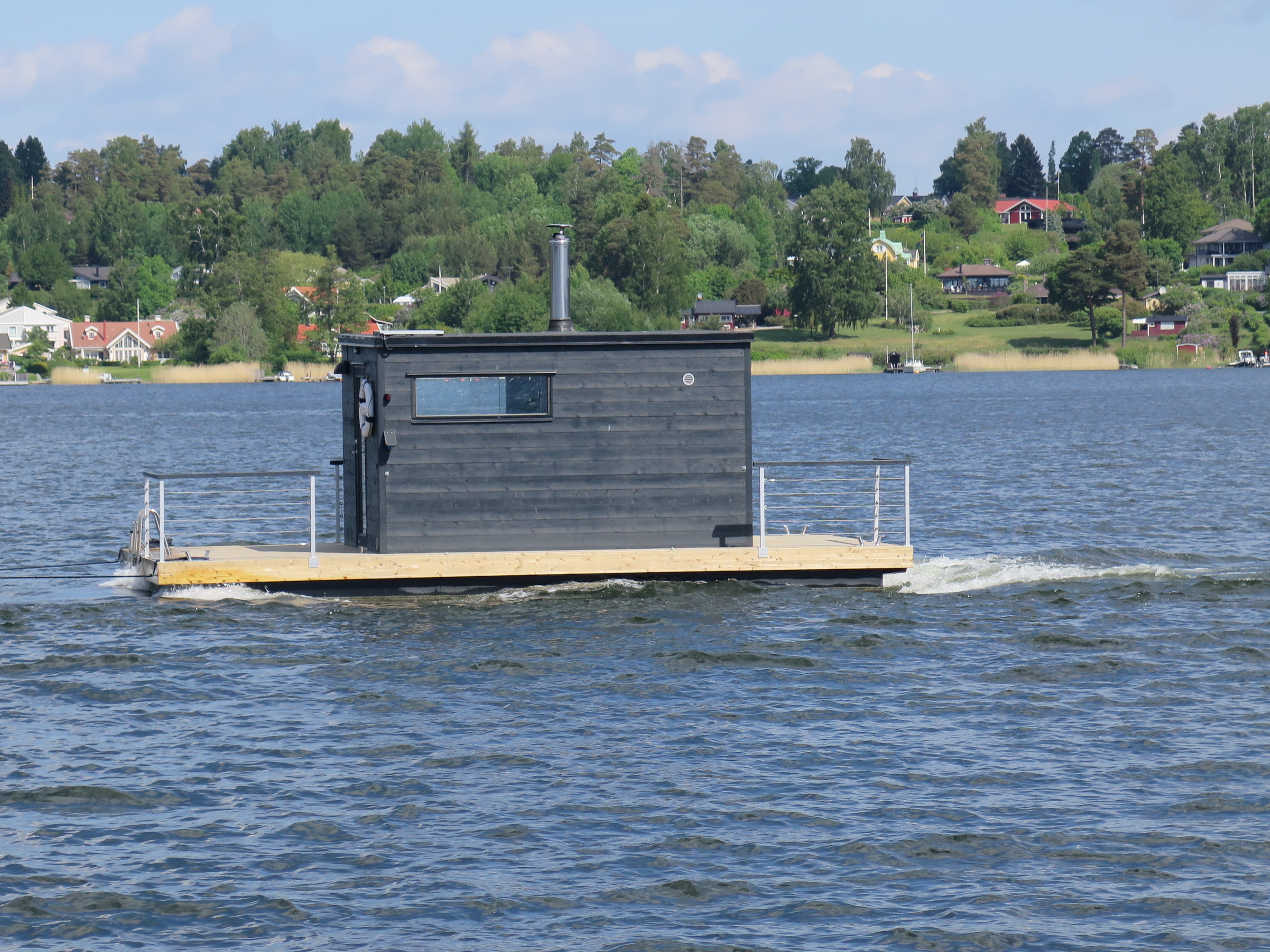 while another was being towed behind a motorhome, 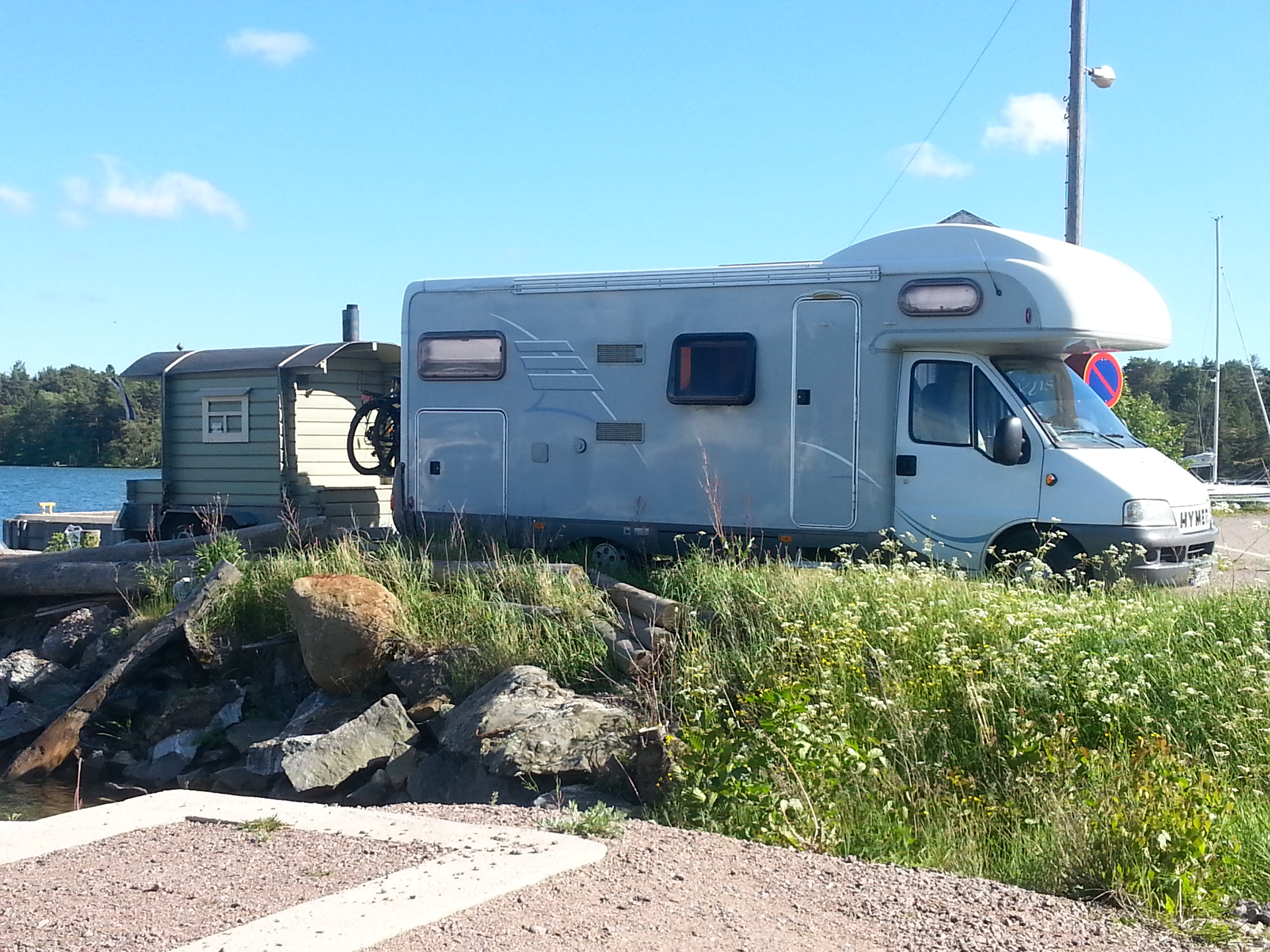 and others are on the shore to allow them to jump straight into the water after the sauna. 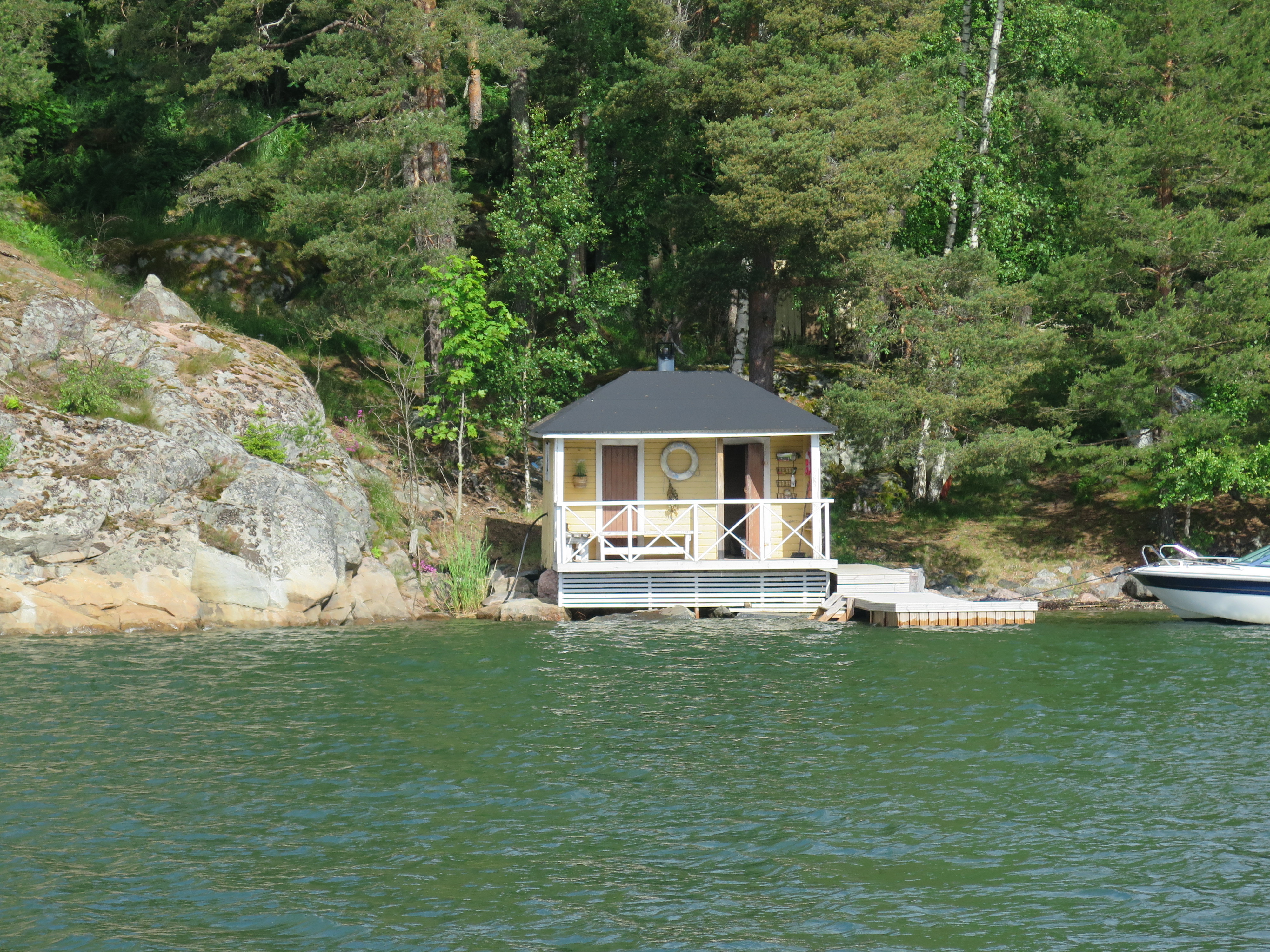