On the way out to the Baltic four years ago, we got to know Leeuwarden very well. This was mainly because of extensive bridge works on the Drachtersbrug on the southern edge of town. Today we looked forward to going through this stretch again, optimistically hoping that all the bridge works were complete and we would get through easily. This proved to be completely true and they seemed to have mislaid the bridge. In fact it was only the chart plotter telling us that we had just hit a bridge which told us where it should have been (both the standing mast route charts and the Navionics charts still showed the bridge!). It seems that the final aim of the bridge works was to turn it into an aqueduct, so we ended up simply driving over the road and they had then removed the entire bridge.

The rest of the trip was pretty straightforward as well. Dokkum – the first town on the route – was a breeze compared to Groningen and all the bridges opened fairly seamlessly without too much waiting time. We then got to Burdaard and went through one bridge, paid the Bruggegeld (toll) into the flying clog, only to be told that the next bridge in a few hundred metres was then closed for an hour. That meant an enforced lunch break. This went quicker then expected as the German boat behind us suddenly went past shouting that the bridge was open. We dropped the lines in record time and made it through on the green light, only to have to weave through a group of large powerboats the other side of the bridge who had cast off and were more or less blocking the route. I restrained myself from expressing their incompetence to them in stronger terms, but did muse on what the collective noun for a group of large powerboats might be – a ‘buffoon of boats‘ or perhaps a ‘plonker of powerboats‘?

Once through them, we had a good run, down through Leeuwarden where either they had laid on an accompaniment for our trip through, or, more likely, a festival of barrel organs was taking place. Not your everyday event, but intriguing none the less. The pieces of music are transcribed onto the barrel using metal pins and staples. Pins are used for short notes, and staples of varying lengths for longer notes. To provide variety (and be as efficient as possible) each barrel usually had a number of different tunes. Creating these pinned barrels was something of an art form, and the quality of the music produced by a barrel organ is largely a function of the quality of its pinning. We did doubt that the one playing ‘Don’t Cry for me Argentina‘ was using an original barrel for the music and we weren’t sure whether the poor quality of this piece was down to the pinning of the barrel or simply the quality of the composition! Barrel organs can apparently also be known as  a hand organ, cylinder organ, box organ, street organ, grinder organ, and Low Countries organ. The latter seemed particularly appropriate in the circumstances. 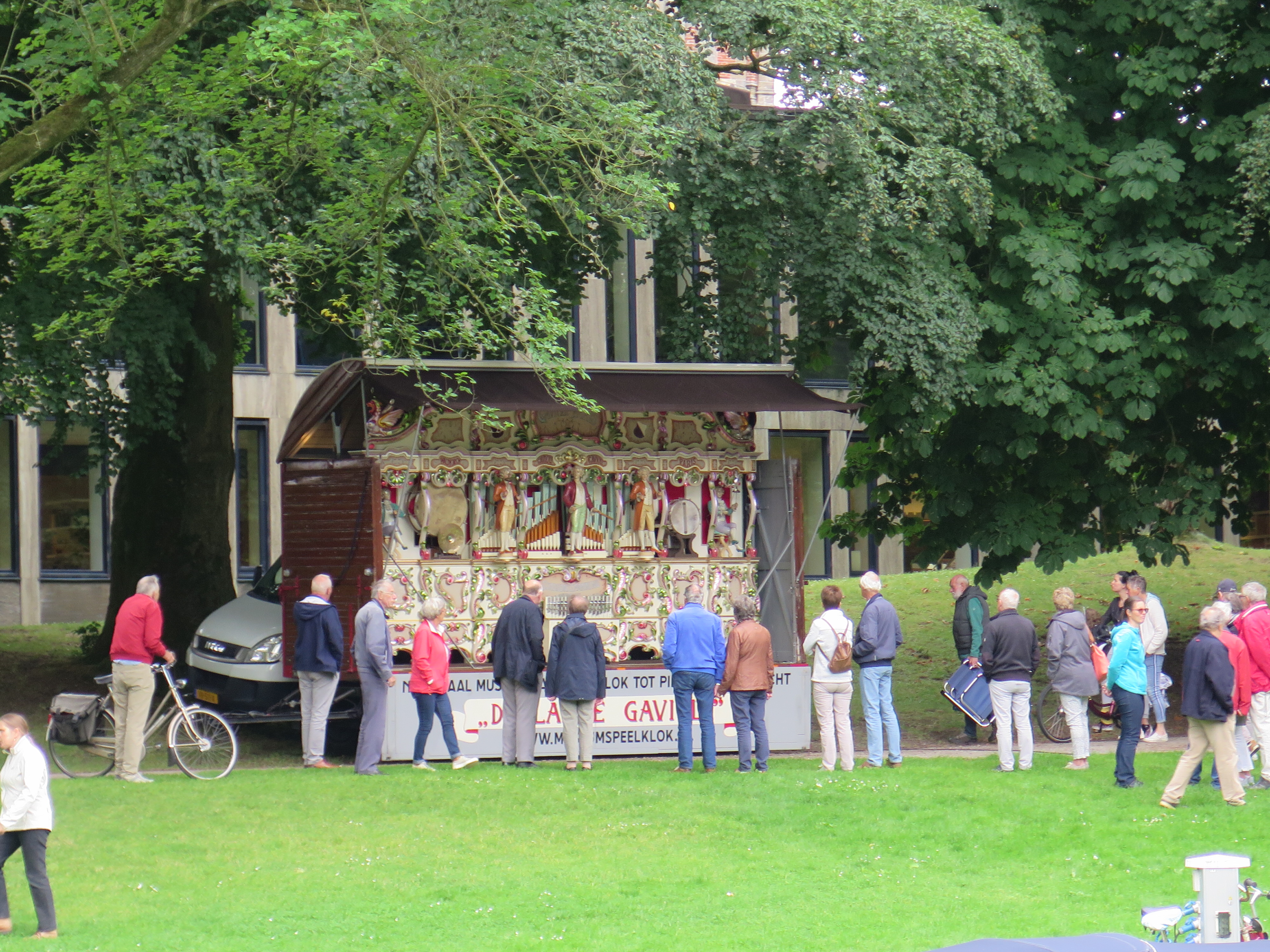 Once through Leewarden we carried on past the missing bridge and found one of the canalside staging areas to moor up for the night. It is a little shallow, but so long as the canal doesn’t go down overnight, we should be able to leave again in the morning. In total we covered 30.5 miles in seven and a half hours. Tomorrow we will head down to the Ijselmeer.